In the prescient science fiction movie "Her," set in a near future, the main character works as a professional writer, composing letters for people who are unable to write letters of a personal nature.

This makes perfect sense. Consider that as early as 1982, futurist John Naisbitt coined the expression "High tech, high touch" in his book Megatrends.

He theorized that in a world of technology, people will long for personal, human contact.

So when was the last time you wrote a postcard?

It used to be "de rigueur" to send a postcard from abroad, when vacationing.

Children looked forward to getting these cards for their scenic panoramas and exotic stamps.

I haven't sent a postcard in years. But all that might change because of a new app "TouchNote."

Mailing a postcard is easy because all you do is:

1. select an image from your photos
2. write a caption
3. add an address from your contacts
4. press send.

Postage is free and the whole thing will set you back $2.99.

The more postcards you send, the less it costs.

Email ThisBlogThis!Share to TwitterShare to FacebookShare to Pinterest
Labels: TouchNote

I am:
1. drinking a double espresso
2. solving the NY Times crossword puzzle
3. eating a bowl of cereal.

Not being a morning person, I am somewhat comatose. In contrast, at that same time, my son Eric is in alert mode. He likes to invade my personal space to lecture me about the topics he finds interesting: science, tech and economics. It is not sufficient for me to nod my head. He expects me to understand what he is talking about.

A few months ago, he told me about the computational universe and a guy called Stephen Wolfram.

This time, I realized I had to shake myself out of my torpor and pay attention.

Stephen is very, very smart. He is a theoretical physicist, a computer scientist and a mathematician.

And he was the youngest person at age 21 to ever win a MacArthur Genius Award.

Wolfram’s scientific work involves the development of a major new approach to science, in which nature is described in terms of simple computer programs rather than traditional mathematical equations. His work provides new foundations for examining a range of fundamental questions in physics, biology, computer science, mathematics, and other areas.

I know, it gives me a headache. But we must plow on, because this is important folks.

It was previously thought that describing something as complex as the universe would require very complex mathematical proofs.

But Wolfram discovered that profoundly complex systems can be generated by very simple programs.

Here is one of his most important discoveries - he calls it Rule 30. 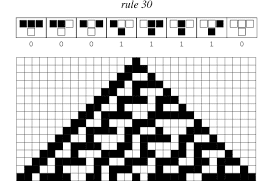 The picture shows what happens when one starts with just one black cell and then applies the rule over and over again. And what one sees is something startling - and probably the single most surprising scientific discovery I have ever made. Rather than getting a simple regular pattern as we might expect, the cellular automation instead produces a pattern that seems extremely irregular and complex."

So class, to summarize Rule 30:

1. though the rules are simple

2. and though it starts from a very simple condition - black and white squares

3. the behavior produced is very complex.

This is what is produced after repeating the rule hundreds of times: 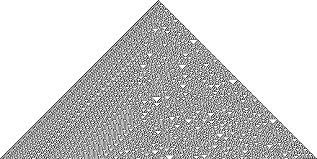 Wolfram believes this basic phenomenon is ultimately responsible for most of the complexity we see in nature.

In other words, if we really want to understand nature’s complexity, we need to go beyond mathematics with all its complicated equations and symbols.

Instead we should be embracing “a new kind of science” – as Wolfram titled his book – in which the answers to science’s most difficult problems lie in simple computer programs.

We should be able to use simple programs to decipher the wonders of the universe. 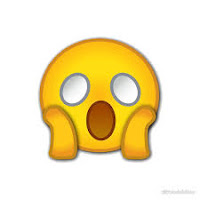 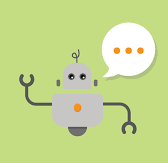 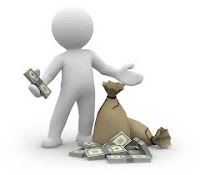 Last month a representative from a large substance misuse treatment facility came to the headquarters of the Employee Assistance Professionals Association - my day job.

She told us that most people think their health insurance companies cover treatment - only to find that they cannot afford even the co-pays.

Fortunately, they had had great success in referring patients and their families to a company I had never heard about.

They are the only recovery-based behavioral healthcare lending company in the country, providing low interest loans for behavioral health, substance abuse and/or eating disorder treatment. They help cover the cost of co-pays, high deductibles, or the entire stay.

They make it as easy as possible to apply for a loan. Potential clients answer a few simple questions and are approved instantly. The money is wired into their accounts the next business day and sometimes, that very same day.

I thought you should know.