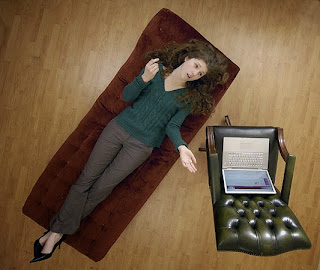 Perhaps unsurprisingly, I found out about this new website by stealing and reading my teenage son's Wired magazine. Wired is a somewhat dense and very male magazine that reports on how emerging technologies affect culture, the economy and politics. I love Wired.

But I digress. As Wired explains: "TalkSession [is] a website that connects patients to mental health providers. The site lets users vet caregivers based on needs and specialties, and a diagnostic patient questionnaire seeks compatibility in communications styles and outside interests." So if you like to ski and your therapist likes to ski, you should have a match made in Heaven...

The article continues, "Then patient and practitioner connect via TalkSession's video platform... There are hurdles. For one, doctors' licenses aren't portable between states...And fewer than 20 states force private insurance to reimburse telemedicine." There are other issues. It is unclear if the site welcomes licensed social workers or LMFTs. Every clinician pictured on the site (and all the clients,) looks hip and beautiful. People of color are notably absent - at least visually.

Criticism aside, I encourage anyone in the mental health field, including clinics, substance abuse treatment facilities and individual practitioners to study this site. There is much to learn from a marketing perspective. And there is no doubt in my mind that video platforms are here to stay, and may grow into the preferred service delivery method in the very near future.

Email ThisBlogThis!Share to TwitterShare to FacebookShare to Pinterest
Labels: TalkSession 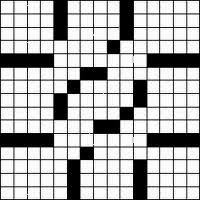 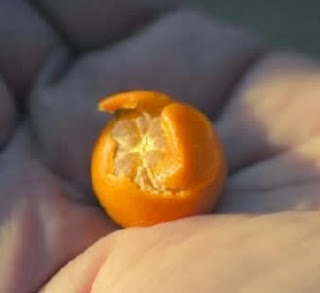 Around the middle of January is when I say to myself, "Crap! I need to start implementing those New Year's resolutions I made."

Lucky for me, I have help from my colleague Mark Sagor.

Mark is one of the founders of Comp EAP, a Massachusetts based employee assistance program. He also writes an interesting, thought provoking blog called Stress.Health.Business. And he wrote a post "The Big News About Tiny Habits" that turns out to be just what the doctor ordered. He is letting me share it with you:

The path to perfect is littered with failure and disappointment and should be avoided by anyone seeking self-improvement. Perfect is the enemy of good because perfect is an oversized and complicated fantasy, not an achievable goal. When it comes to making changes in your work habits or your relationships or your health it often pays to think small.

I am one of the more than 14,000 people around the world who have taken the 30 minutes it requires to learn something important about how behavioral change works from Dr. BJ Fogg. Dr. Fogg, a professor at Stanford, has developed an ingenious 5-day method for initiating a new habit that is effective, easy and fun.

The way it works is you take about 12 minutes to learn what Dr. Fogg’s research has revealed about the formation of habits and then select 3 new behaviors (habits) you want to develop for yourself. Next you practice your three behaviors for five days and respond to a daily email message from Dr. Fogg. That’s all it takes (and it’s free)!

One of the behaviors I chose to work on back in March of 2012 when I participated in Dr. Fogg’s Tiny Habits program was how I responded to my wife walking in the door after work. Even though we have had a long and successful marriage, complacency is a poor strategy in both work and home matters and I believe in the value of continuous (albeit small) improvements in most meaningful pursuits.

Over the course of many years I had (unintentionally) developed the habit of remaining seated when my wife came home from work. She usually gets home later than I do and I am usually reading or doing email or watching the news on TV when she walks in the door. I decided that when she arrived home (the trigger or anchor for the habit I wanted to develop) I would get up and walk over to her and greet her with a kiss.

The first day I did this my wife smiled. The second day she smiled and looked at me quizzically, her expression translating as “What’s up?” I told her what I was working on.

I have been reliably getting up and greeting her this way for about 18 months now. This is a small behavior and its certainly not a “game-changer,” but it’s a good thing. It’s an improvement. And it has made a big difference in how I look at, and understand, behavioral change.

So if you’re looking to change a behavior at home or at work or in your personal health practices, do yourself a favor and check out Dr. Fogg’s program. 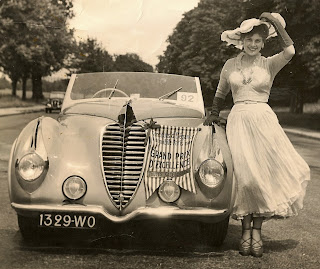 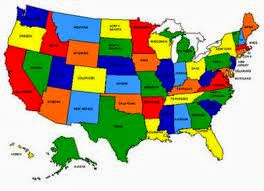 The dawn of a new era in the delivery of psychotherapy, counseling and crisis response.

Thanks to technology, we can deliver these services across the country and around the globe.

Not so fast, Sherlock.

Our clients can't take advantage of all the technical marvels because of licensure issues. Our tech may be 21st century, but our clinical licensure is stuck in the 20th century. You cannot deliver services across state lines, unless you hold a license in that state. That costs money. And there is often no reciprocity, meaning you may have to take an exam and jump through a variety of hoops to get that other license.

This leads to all kinds of sub-optimal, illegal and unethical work arounds. Call your services "coaching" and you don't have to be licensed. Go ahead and do it anyway. When was the last time someone was prosecuted for delivering services across state lines?

The truth is we need a permanent solution, and fixlicensure.org aims to do just that. This is their manifesto:


It is time for consumers and patients to freely access doctors and other health care professionals no matter where they are located throughout the country... This requires a massive overhaul of our medical licensure system. The current approach, requiring health providers to obtain multiple state licenses and adhere to diverse and sometimes conflicting state medical practice rules, is a barrier to progress, quality, competition and economy... ...The U.S. military and Veterans Affairs (VA) Department have already acted to fix licensure barriers. So have the European Union and many other countries. American consumers, American health providers and American taxpayers are being left behind. ...the time to take action is now.

A good place to start is to sign their petition.

I know I have.