It is my son Eric's job to keep me teetering on the brink of horror by sending me the latest and greatest news from the frontiers of A.I. and innovation.

This week, he clued me in on a concept called the "Uncanny Valley." The "UV" is "a hypothesized relationship between the degree of an object's resemblance to a human being and the emotional response to such an object. The concept of the uncanny valley suggests that humanoid objects which appear almost, but not exactly, like real human beings elicit uncanny, or strangely familiar, feelings of eeriness and revulsion in observers."

Remember the toons in the movie "Polar Express"? Disturbing right?

In a must see short film, "Goodbye Uncanny Valley", the UK artist and animator Alan Warburton explores the implication of this advance. It's a bad news/good news situation.

1. Bad. Worried about fake news? What happens when you can't tell the difference between the actual and the computer generated? When you no longer need flesh and blood actors because it's cheaper to just create them? Warburton doesn't offer any solutions. Who needs human psychotherapists if you can talk to an image of one which can access everything mankind knows about counseling?

2. Good. In the movie "Interstellar", the film maker programmed what was known about black holes to create a visual representation that obeys the known laws of physics - even though no one has ever seen an actual black hole. Imagine being able to perform scientific research without the cost and restrictions of current knowledge.

3. Good. Artists on the cutting edge of computer generated art can use the advances in CGI to create wondrous images. Think Dali surrealism on testosterone.

Right this second, we don't have to worry about point 1 too much - perfected CGI is the realm of movie makers with very big budgets, and an army of experts. But in time, the cost will go down and sophisticated tools will replace the animation experts.

It's time for another bulletin from the frontiers of artificial intelligent (AI).

In a major breakthrough for artificial intelligence, AlphaGo Zero took just three days to master the ancient Chinese board game of Go ... with no human help.

Let me repeat: Google’s AI group, DeepMind, unveiled the latest incarnation of its Go playing program, AlphaGo – an AI so powerful that it derived thousands of years of human knowledge of the game before inventing better moves of its own, all in the space of three days.

The feat marks a milestone on the road to general-purpose AIs. Because AlphaGo Zero learns on its own from a blank slate, its talents can now be turned to a host of real-world problems.

At DeepMind, AlphaGo Zero is working out how proteins fold, a massive scientific challenge that could give drug discovery a sorely needed shot in the arm.

As an article in the Guardian pointed out, "While AlphaGo Zero is a step towards a general-purpose AI, it can only work on problems that can be perfectly simulated in a computer, making tasks such as driving a car out of the question. AIs that match humans at a huge range of tasks are still a long way off... More realistic in the next decade is the use of AI to help humans discover new drugs and materials, and crack mysteries in particle physics."

And now you know. 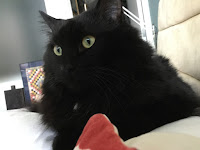 Ripl is an amazing free app which everyone who has a private practice, small business, blog, etc. should immediately download.

The app allows you to easily create a snappy, attractive, and totally professional looking video in a matter of minutes and post it on social media.

To demo it, I created a video about James Dean - the family cat - and posted it to Facebook.

Now that I know how to do it - I could probably create another video in seconds.

Full disclosure: in part I did this to show off JD (as he is known in our family.)

But really - the app is awesome.

PS If you are feeling more ambitious, you can create animated videos using Powtoon.com.

Email ThisBlogThis!Share to TwitterShare to FacebookShare to Pinterest
Labels: Ripl 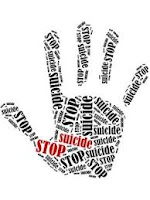 I watched Dr. Sally Spencer-Thomas give a stirring presentation"Shining Lights of Hope: EAPs, Leadership and the Social Movement of Suicide Prevention" at the 2016 World EAP Conference. So I paid attention when she published a blog post "15 Top Apps for Resilience, Mental Health Promotion & Suicide Prevention."

In her introduction to the post, she writes: "When we consider a comprehensive strategy to suicide prevention and mental health promotion, it’s helpful to segment approaches into 'upstream' (preventing problems before they emerge through self-help), 'midstream' (catching emerging problems early and linking people to least restrictive support), and 'downstream' (helping people with more serious mental health challenges and suicidal thoughts) tactics.

Thus, for this article, I have organized some of the most popular, best researched and most innovative apps into these three categories."

She lists a number of apps that I have previously posted about - but here are some new ones for you to consider:

Positive Activity Jackpot Developed by t2health, this app uses the phone’s GPS system to find nearby enjoyable distractions. It comes with a clinician’s guide.

Pacifica Pacifica is designed to help people who live with anxiety through soothing meditation and other personalized self-help strategies. Check out the science behind this strategy.

DBT Diary Card and Skills Coach Through this app, users can master the skills of Dialectical Behavior Therapy (DBT), known for its effectiveness in regulating emotions and interpersonal relationships. Users remind themselves of skills they are trying to develop and track skill use.

Koko Developed by researchers at MIT, this app provides help for people in all states of distress from bullying and harassment to suicide and self-harm. Koko provides evidence-based supportive interactions with users while referring users in crisis to international lifelines for immediate help.

Virtual Hope Box The original non-app version of the Hope Box was developed as a tool to help therapists in clinical practice work with their suicidal clients find reasons for living. Clients would find something like a shoe box and fill it with future goals, pictures of loved ones, bucket list experiences, and the like. When they felt their suicidal intensity increase, they would bring out the box to remind themselves of these things.

The Virtual Hope Box (VHB) does this and more. Still designed as something to augment treatment, the VHB helps people live through painful emotional experiences through distraction, inspiration, relaxation, coping, support and reasons for living.

SAMHSA – Suicide Safe This app is designed to help healthcare providers reduce patient suicide risk and is based on the SAFE-T Approach.

Web Secret 491: 13 Things I Found on the Internet Today 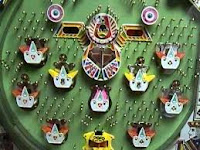 I came across 13 Things I Found on the Internet Today (vol. CCLIII).

As someone who has been blogging weekly since 2008 without EVER missing a week, I admire consistency. So 253 posts about fascinating esoterica? Hats off to you, Nessy.

If you go to the messynessy.com landing page, you will note that the aforementioned Nessy also writes about other topics.

"Don't Be a Tourist" is a travelogue of off the beaten path places.

"Art and Design Awesomness"... Well, Nessy, you had me at Pachinko.

Bottom line, you could happily spend hours wandering around this website.

But back to 13 things (Vol. CCLIII). Nessy is a Brit living in Paris so a lot of her finds skew towards Europeana. And what finds they are:
It's all quite delightful, a little strange, sometimes a wee bit morbid.