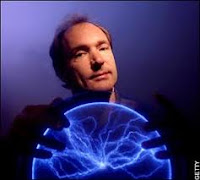 Facebook is a social network worth $50 billion, with more than 500 million active users.

The Social Network is an Academy Award winning movie about the creation of Facebook that has grossed over $200 million worldwide (as of January 2011).

So it's not surprising that many people think that Mark Zuckerberg, the founder of Facebook, is one of the most important people in the world.

However, when it comes to the World Wide Web, there is someone who is more important than Mark.

He is not a member of Gen Y, he is a Baby Boomer.

He invented the Internet. That's right, he is directly responsible for creating the medium that allows Facebook, YouTube, Google to exist, and the blindingly rapid social and political change that result from it.

My modest proposal for today is you should know about this person. His name is Tim Berners-Lee. He is a British computer scientist born in 1955. He invented the Internet in March of 1989.

In case that wasn't sufficiently impressive, Tim decided never to commercialize or patent his contributions to the Internet technologies he developed. He gave the Internet to us. For free.

My oldest daughter was born in March of 1989. She is the same age as the Internet. Later this month, she will turn 22.