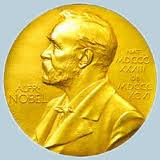 Do you ever feel like your faith in humanity needs to be restored?

When that happens to me, I go to the Nobelprize.org website.

We all know that Nobel Prizes are among the most prestigious in the world. And thanks to the Internet, we can now listen, watch and learn from winners past and present. It's like watching a TED talk on steroids.

Dozens upon dozens of Nobel speeches, interviews, documentaries and more are curated on the site. Here are three examples:

1. Faulkner's Nobel Prize in Literature Acceptance Speech. One of my all time favorite quotes, "I believe that man will not merely endure: he will prevail. He is immortal, not because he alone among creatures has an inexhaustible voice, but because he has a soul, a spirit capable of compassion and sacrifice and endurance," is from William Faulkner's Nobel acceptance speech. How great would it be to listen to him give that speech? You can do it right now.

2. Aung San Suu Kyi's Nobel Lecture. In 1991, Burmese Aung San Suu Kyi was under house arrest and unable to collect the Nobel Peace Prize, awarded for her non-violent struggle for democracy and human rights. On 16 June, 2012, she finally delivered her amazing Nobel Lecture (a requirement for all winners) in Oslo, Norway. In addition to being privy to her speech, you get to see the spectacularly beautiful hall where the lecture is delivered.

3. Interview with John Nash. All Nobel Prize winners are interviewed. John Nash was awarded the Nobel Prize in Economics in 1994. Many people know about him through the Oscar winning motion picture "A Beautiful Mind." In this 2004 interview, Nash talks about the impact the Prize had on his life, his talent for mathematics as a child, the work that gave him the Prize, talks about important economic issues of today, and shares his thoughts about the movie on his life.

In 1895, Alfred Nobel endowed the Prizes in his will, instructing that they be given to those "who have conferred the greatest benefit on mankind."

Email ThisBlogThis!Share to TwitterShare to FacebookShare to Pinterest
Labels: nobelprize.org