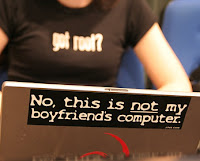 I am old enough to have been told, when I was growing up, that I could not participate in various endeavors, simply because I was a woman.

For example, when I was in elementary school, I was told I could not participate in martial arts or attend Yale University, (which did not accept women at the time.) Nothing irritates me more than being told I can't do something (because I am a woman.)

Thus the times forced me to become a pioneer. I was in the fifth class that accepted women at Yale, I was the first female member, and later manager of the Yale Judo team.

Fast forward a couple of decades, and as I write this, I am still one of very few women to blog about technology and code HTML. This has me irritated all over again, and so I wrote a rather sarcastic post, Web Secret #148: Women in Computer Technology.

So you can only imagine how excited I was when I stumbled across Makers.com. Makers features short, segmented video interviews with dozens upon dozens of women who were/are trailblazers in their fields. It's a bit like TED talks, with only women, for people with a sub 5 minute attention span.

Many of those interviewed have pioneered away from the public eye, others are famous. I immediately gravitated towards the science and tech category.

Did you know that Google's first ever female engineer is now the CEO of Yahoo? Marissa Meyer describes her pioneering days before, during and after Google.

How about listening to Katherine Wolf, a woman who invests in socially redeeming start-ups like OrganJets, a company that helps transplant patients travel across the US to receive treatment with the use of private jets?

Or pay attention to Gina Bianchini a social software entrepreneur.

It's a good start.

It made me somewhat less irritated.

Email ThisBlogThis!Share to TwitterShare to FacebookShare to Pinterest
Labels: makers.com