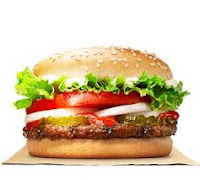 And so, I revisit Web Secret #39: Whopper Sacrifice.

Why? Because this Burger King viral marketing campaign remains one of the most creative I have ever encountered.

Note to my readers: The links in this post have long been taken down.

If you read my Web Secret #9 you know that viral marketing refers to techniques that uses pre-existing social networks (eg Facebook, LinkedIn, etc.) to produce an increase in brand awareness or achieve other marketing objectives.

Recently I read about a viral marketing ploy used by - of all companies - Burger King, that is so clever, elegant and thought provoking, I just had to share it with you.

Basically, Burger King created an application for Facebook, called Whopper Sacrifice that rewarded you with a coupon for BK's signature burger for every 10 'friends' you managed to delete from your massively cluttered list of Facebook friends. The application then sent a notification to the banished party via Facebook's news feed explaining that your desire for a Whopper was stronger than your love for the unlucky former 'friend.'

The app also added a box on a user's profile page charting their progress toward the free burger with the line, "Who will be the next to go?". Sacrificed friends had the option of sending an AngryGram to the axing perpetrator.

The marketing ploy was so successful that visitors to WhopperSacrifice.com are now told that "Facebook had to disable Whopper Sacrifice after your love for the Whopper sandwich proved stronger than 233,906 friendships."

I figure that for the cost of about 23,000 burgers, Burger King probably reached 500,000 potential customers. And they got a ton of free publicity for their innovative viral marketing tactic.

Now it's your turn. How will you virally market your products and services? The majority of viral marketing techniques don't cost a penny. Just brain power.