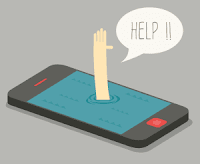 About a month ago, the New York Times published an article "A Dark Consensus About Screens and Kids Begins to Emerge in Silicon Valley."

Essentially, the article is about how technologists in Silicon Valley are struggling to limit the screen time of their children. They believe "the benefits of screens as a learning tool are overblown, and the risks for addiction and stunting development seem high."

I believe this issue is possibly the greatest facing the parents of the under 18 generation.

Here are two practices of the parents in the article:

1. Daughters, ages 5 and 3, have no screen time “budget,” no regular hours they are allowed to be on screens. The only time a screen can be used is during the travel portion of a long car ride or during a plane trip.

2. Children aren't allowed to have cellphones until high school, are banned from phone use in the car and severely limited at home.

Of course the difficulty is that other children may have cell phones and tablets, and it is easy to go over to a friend's house after school and use their devices.

I liked the approach of this technologist:

"...no phones until the summer before high school, no screens in bedrooms, network-level content blocking, no social media until age 13, no iPads at all and screen time schedules enforced by Google Wifi that he controls from his phone. Bad behavior? The child goes offline for 24 hours."

But the reality is that opinions about best practices limiting screen time are all over the spectrum. Some parents believe that all children should learn to code at an early age. Others don't believe in strict limits arguing they watched TV all the time as a child and still became successful.

There is a dearth of research on the subject, in part due to the lightning speed with which technology evolves. As soon as we establish best practices, we are faced with a new evolution. Watch out when virtual reality is perfected and we can disappear into worlds that have no reality.

In the interim, EAPs have the opportunity to develop lunch and learn programs about how to limit screen time. And individual counselors can develop this expertise to help their clients of all ages.

Many grownups have a problem with screen time.