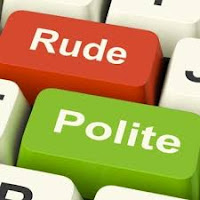 A basic grasp of digital etiquette is an essential aspect of modern “soft skills.” However, there is no real consensus on what actually constitutes “good” digital manners, and even if there were, that consensus would be constantly shifting as technology advances and social mores evolve.

So sayeth, the New York Times in a lengthy article on the subject. As always, I have summarized the essential information from said article:

Digital communication is usually text-based. Both the content of your message and its tone will live or die based on what you type on your keyboard, so the gap between, say, landing a joke and causing mortal offense can be perilously fine.

In digital messaging, a period is no longer required to show that the message is over; a sent message is presumed to be complete. Used in a sincere context — as in, “That’s terrible.” — the period reinforces the seriousness of the message. When used after a short, positive phrase — “That’s great.” — the tone of voice implied by the period can add a sense of sarcasm.

As in the real world, a lot of digital etiquette is highly context-dependent; you wouldn’t behave the same way when sending an email to your manager as you would when texting your best friend. As well as choosing the right level of formality for the situation, you should be prepared to adapt according to the culture and background of the person you are speaking with and the medium through which you are communicating.

In an email chain, this could mean starting with a formal means of address, such as “Dear Mr. Wesson,” but then switching to “Hi Rupert” if the conversation becomes more familiar.

There are plenty of specific digital etiquette pointers to live by: don’t reply-all to an all-office email; always get consent before sending an intimate photo; never leave a voicemail (a text message shows much more respect for the other person’s time).

Etiquette in the digital world can shift particularly quickly as new technologies and platforms call for the development of new standards.

Even where the technology stays the same, social and cultural norms can rapidly shift. It used to be OK to upload whole albums full of photos to Facebook and tag everyone in them. Now, the rise of Instagram has correlated with a more curated approach to online photo-sharing, and people are generally more aware of privacy and security concerns.

Next week, some specifics.
Posted by iWebU at 11:00 AM

Email ThisBlogThis!Share to TwitterShare to FacebookShare to Pinterest
Labels: etiquette