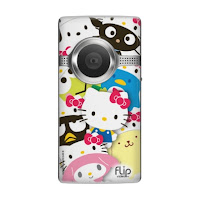 This post is a cautionary tale about the speed of technological obsolescence.

In 2008, I posted a rave review of the Flip Video Camera.

Not quite 3 years later, The New York Times reported the demise of the Flip.

The Flip was a great product. It was easy to use, did what it was supposed to do, was small and cute, (you could get macho black if you wanted to.)

My colleagues bought them. I bought one for my daughter.

Here is the quick history:

The Flip video camera, went on sale in 2007, and quickly dominated the camcorder market.

It was a hit and sold millions. In 2009, the founders cashed out and sold to Cisco Systems.

April 2011, Cisco announced it was shutting down its Flip video camera division.

The Times article stated "Even in the life cycle of the tech world, this is fast." The theory is the Flip died due to advances in smartphone technology and "the ferocious metabolism of the consumer marketplace."

The article concludes, "the smartphone has crushed the market for GPS devices, put a serious dent in the point-and-shoot camera industry and threatens the existence of many other everyday devices — the wristwatch, the alarm clock and the portable music player."

Wait a second. I have an iPhone 4. It definitely makes my iPod obsolete, because it has a built in iPod. It does make my alarm clock - when I travel - obsolete. My kids have never worn watches, they check the time on their phones. It does not replace a built in or dedicated GPS device for someone who uses GPS on a daily basis.

Most importantly, the iPhone's puny video capability cannot begin to compare to the Flip's. The Flip could be attached to a tripod. You could record an hour's worth of material. It was a snap to download the entire video to my laptop.

Smartphones, at least in their current iteration, are no match for the Flip.

But are we beginning to throw out the baby with the bath water?