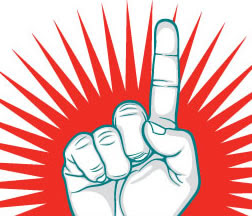 Here are three important facts about the impact of technology on the world we live in:

1. It's flat - when it comes to just about everything , the world is increasingly becoming a level playing field, where all participants have an equal opportunity.

2. We live in different "time zones" - across our planet some of us are wearing Google Glass while others are plowing their fields with oxen. Even in the US there is a broad spectrum of technology adopters, from people who are just coming around to using a cell phone, to users who program their own websites.  Every time zone can be impacted by technology.

3. There is less than 5 degrees of separation between any two people on the planet - people can share ideas with only a few jumps to a large portion of the world’s population and with even fewer steps to the entire population of a nation.

Experts tell us that even the average tech involved person is more "famous" than the most famous people of the 19th century. Many Facebook and Twitter users have thousands of followers. A lone individual can have a huge impact on others.

It's both an opportunity and a curse.

Email ThisBlogThis!Share to TwitterShare to FacebookShare to Pinterest
Labels: Power of One