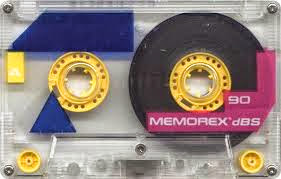 Established in 1961, Memorex entered the consumer media business in 1971, first with its "shattering glass" advertisements and then with a series of famous television commercials featuring Ella Fitzgerald.

In the commercials, she would sing a note that shattered a glass while her performance was recorded on a Memorex audio cassette.

The tape was played back and the recording also broke the glass, the narrator asking "Is it live, or is it Memorex?"

Here is a commercial from the early 1980s so you can get a feel for their famous ads:


Thirty years later, the distinction between live performance and a performance that is recorded on some digital medium is fading very, very fast.

I recently purchased a set of Bose headphones to replace my Apple Earbuds. I was able to test them at the Bose store on my personal iPhone. I listened for approximately 30 seconds and started laughing. They were simply so superior to my Earbuds that it wasn't even close.

These headphones consist of a thin plastic wire, connected to some small plastic "buds" that I place in my ear. You would never imagine that something that looks so insubstantial can deliver so substantial a sound.

Now when I listen to music during my workouts, it all sounds so much better. In fact, the sound is so good that it's scary.

You see, my father was an opera singer. Now, when I listen to his recordings using my new headphones, and I close my eyes, I feel like he is in the room with me. The sound is multi-dimensional and I am enveloped by his voice. It thrills me to hear is voice. He is so present. It also magnifies my sorrow, as I am reminded of my loss.

I truly believe that the 3D virtual reality concert experience is around the corner. In the very near future, you will enter a pod and you will be surrounded by a virtual audience, watching a virtual recreation of that performance.

My father will be there.

Email ThisBlogThis!Share to TwitterShare to FacebookShare to Pinterest
Labels: Memorex