Web Secret #73: Social Media Is Not a Fad

I am always trying to succinctly explain to Baby Boomer non believers why social media is relevant to them.

And then I Stumbled Upon Erik Qualman's brilliantly executed video "Statistics Show Social Media Is Bigger Than You Think" which deftly answers the question "Is Social Media a Fad or the biggest shift since the Industrial Revolution?" using statistics.

I have pared down Qualman's 37 stats to just 10 of the most compelling:

1. Years to Reach 50 millions Users:2. If Facebook were a country it would be the world’s 4th largest between the United States and Indonesia

3. 1 in 6 higher education students are enrolled in online curriculum

4. % of companies using LinkedIn as a primary tool to find employees…80%

5. The fastest growing segment on Facebook is 55-65 year-old females
Boomers - are you listening?

6. Ashton Kutcher and Ellen Degeneres have more Twitter followers than the entire populations of Ireland, Norway and Panama

8. The #2 largest search engine in the world is YouTube

9. Facebook users translated the site from English to Spanish via a Wiki in less than 4 weeks at a cost to Facebook of $0

Qualman's conclusion: social media isn’t a fad, it’s a fundamental shift in the way we communicate.

Anytime a website can simultaneously entertain me, provide a useful service, and save me money, I am compelled to pay attention.

Recently, I randomly landed on Backblaze.com, one of dozens of sites that offers online data backup. When Backblaze opens, the first thing that happens is that you are treated to a lifelike 5 second video of a young woman dousing a laptop with gasoline and then setting fire to it.

That was so rewarding, I had to watch it a couple times before further exploring the site.

Online unlimited backup for only $5/month per computer for 50 years via a tiny application that installs in three clicks. They claim this online backup application automatically finds all your photos, music, documents, and other irreplaceable files and compresses and securely encrypts them. When you're not using your computer, it sends them over the Internet to the remote Backblaze datacenters.

But it's not just about back up. What if you need to restore a file? Like all the other vendors out there, Backblaze allows you to restore from the web.

But what I really like is that you have the option to get your files on a DVD or USB drive sent via FedEx. Personally, I am keen on having the option of virtual backup AND something I can hold in my hand (or put in my safe for that matter.)

Try Backblaze for 15 days for FREE.

Then watch the girl flambé the laptop. AGAIN.

Email ThisBlogThis!Share to TwitterShare to FacebookShare to Pinterest
Labels: www.backblaze.com 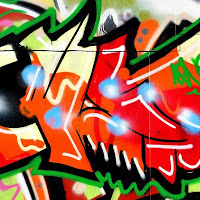 Final thought.
As a last resort, you can hire an online professional reputation cleaner like Reputation Management Consultants. Among other techniques, they will post until the negative comment falls off of page 1.
Posted by iWebU at 8:04 AM No comments: 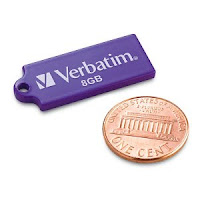 Recently my friend Alex, the software genius, came over to dinner (and to fix one of our 8 computers - thank you Alex), took out his wallet, and slid out...

What the heck is that?!

It was the size and color of two pieces of grape chiclets (only MUCH thinner). In fact it was a brand new, penny thin, one inch long Verbatim TUFF 'N' TINY 8 GB USB Drive.

Fellow gadget freaks, this thing is absolutely amazing. The TINY is one of the most compact, durable USB flash drives available. It is resistant to dust, water and static discharges, and compatible with all USB ports. The TINY comes with a key ring lanyard to attach to mobile phones or key rings. Alex keeps it in one of the credit card slots in his wallet - it takes up virtually no space. Get it in 2GB (orange), 4GB (green) and 8GB (purple) sizes. The 8GB costs about $25.

Question: "What's a little wider than a quarter, a hair thicker, fits in your wallet and holds a boatload of crap?"