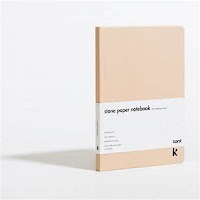 When I work, I always have a notebook in front of me.

There I keep track of ideas, jot down bits of HTML code, write down products I might want to try.

Because I am an extreme stationary nerd, I use different brands of notebooks. I have favored: I was on the lookout for my next favorite notebook when I came across the Australian based Karst Stone Paper company.

The company claims it is possible to make paper without timber and water, without chlorine or acids, without waste, using only a third of the carbon footprint of regular paper using recycled stone.

On the plus side the paper is smoother, brighter, and more durable than traditional paper.

The negative? It's expensive and the notebooks are heavy, not ideal for lugging around in a backpack or a messenger bag.

I ordered one immediately.

But then I received a pair as a gift and some of that changed.

Things that didn't change: They are white (boring), and they look odd sticking out of your ears.

Things that changed: Now I can't imagine how I lived without them.

Email ThisBlogThis!Share to TwitterShare to FacebookShare to Pinterest
Labels: AirPods

He showed up with an Echo Dot, and many many Smart Plugs.

The Echo Dot allows you to access Amazon.com's intelligent personal assistant Alexa through voice commands. You use the Smart Plugs to control the electronic gizmos in your home. All you do is plug the Smart Plug into the wall and then plug your device into the Smart Plug.

Things you can ask Alexa to do:

Remember the computer on the Enterprise in Star Trek? That was my reference point.

Things I quickly learned about Alexa:
So for me, Alexa is not yet ready for prime time. But I did make a mental note to try her again in a couple of years.

Sooner or later, she will be ubiquitous and perfected.

Email ThisBlogThis!Share to TwitterShare to FacebookShare to Pinterest
Labels: Alexa 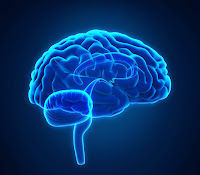