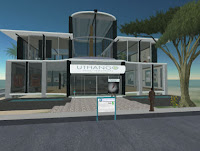 Last week's post provided an intro into the amazing alternative world of Second Life (SL). What are the potential applications of SL for the individual practitioner, or the smaller business operation?

Quite simply, the possibilities are only limited by your imagination.

I will turn to my pioneering friends at the Online Therapy Institute (OTI) to illustrate how you might use SL.

OTI bought a virtual space on the SL Islands of Jokaydia. All of the residents of Jokaydia focus on education in one form or another so OTI found it to be a natural fit. They hired an SL architect to build an office that is used primarily as a place to provide more information about OTI. The office has also been used for consultations and media interviews. Watch this video of OTI founder DeeAnna Nagel being interviewed about coaching possibilities in SL to get a better idea:

CoachReporter: Coaching in a Virtual World from Mark Joyella on Vimeo.

OTI is in the process of building a "SkyBox" above the original office which will offer a therapy room, a small group room and a classroom. A SkyBox location allows for more security so that others inworld cannot simply “drop in” at will. When conducting avatar therapy inworld (an OTI goal for the future), other measures will be utilized to ensure confidentiality such as encrypted chat and voice.

As is true for other social media, using SL for business purposes requires a different order of commitment and knowledge. There are books, video tutorials, and OTI even offers Second Life Consultancy. OTI will meet with you "inworld" and discuss basics about how Second Life works, and what the benefits and disadvantages of working inworld might be for professionals.

I can never think or write about SL without feeling excitement laced with a touch of anxiety. The idea of connecting instantly with people from all over the world to share ideas, teach, learn, and heal is thrilling. But some people have gotten sucked into SL to the detriment of their "real" lives....

DeeAnna Nagel believes that in the future, many of us will live in a "mixed reality", seamelessly moving between our real lives and a virtual world.

We will just have to wait - and see.

I feel that writing a blog post about Second Life (SL) is long overdue. But I have been trying to get a solid grasp of this immense alternative universe - not an easy endeavor.

Definition please:
SL is an Internet accessible virtual world developed by Linden Lab, and launched in 2003. For most early adopters, SL was an adults only sophisticated video game where socialization and fantasy were primary objectives. Think Renaissance Fair on the web. At the entry level, SL is free and enables its users to interact with each other through avatars. Your avatar is a three dimensional representation of yourself in the virtual world. Residents can explore, meet other residents, socialize, participate in individual and group activities, create and trade virtual property and services with one another, or travel throughout the world.

By 2010, SL has developed two quite distinct groups of users. The first group consists of thousands of people who are "inworld" primarily for a virtual "eHarmony" type of experience, often eager to act out in various inappropriate ways. Seekers of the perverse and the pathological can access a cornucopia of sketchy and skewed experiences.

The second group are the business users. And they are behind a mind blowing evolution of virtual possibilities. Hosts of major corporations have bought virtual property, and constructed buildings where they demonstrate products, meet with clients, and collaborate on work projects. Colleges and universities have developed virtual campuses where they offer free courses, and promote their educational offerings.

As an example, check out the Ohio University Second Life campus:

Right now the graphics and animations in SL are primitive compared to say James Cameron's Avatar. But I have no doubt that faster than I can imagine, SL will look more and more like real life.

But you are not a major corporation, or an institution of higher learning. What can SL do for you?

Tune in to next week's post and find out.

If you've been shopping, friending, social networking on the Internet for a while, you have probably signed up for at least a half dozen (or maybe many more) websites.

And now you are having regrets. What were you thinking?

Delete Your Account provides information on how to delete your account from all of the major social networking, blogging, shopping, etc. sites and services across the web that you should NEVER have signed up for in the first place.

In August of 2009, I wrote about a cool site www.123people.com that searches through many social networks forums (like Facebook, Hi5, MySpace, Bebo, Friendster), Wikipedia and other communities to see if you are a registered member there.

To my alarm, I discovered I had a MySpace profile that I didn't even remember creating.

Well today, thanks to Delete Your Account - it's gone - and it took me 5 seconds. All I did is enter MySpace in their search window. The following instructions and link appeared:

Better yet, if you experience deleter's regret, at the bottom of the deletion instructions for each site are instructions to reactivate the account (if possible).

For MySpace, it said:

Oops! I deleted it! How can I get my account back?
You can re-register with the same email address, but you will not be able to get all of your data back.

I love it, organizing your Internet closet, one website at a time...

Email ThisBlogThis!Share to TwitterShare to FacebookShare to Pinterest
Labels: deleteyouraccount.com

And even though it's so big that it's been written up in Fast Company, the New York Times, Mashable, and Tech Crunch - and that's just to name a few.

For the uninformed, Chat Roulette is a web site that pairs you with a random videochat partner. You can click "next" any time, or stay with your current pairing. And with that, anything is possible. You could be talking to a cool bunch of people in Ireland about what it's like to live there or you could be exposed to a broad range of perverted activity. One adventurous colleague explained "...so you click next, and then for a while, you're not sure what you're looking at. And then you realize what your looking at... Gross! And you click next again."

For a more extensive explanation, watch the video:

So can Chat Roulette be harnessed for the power of good? For work and business purposes? Therapeutic purposes?

I don't know. Yet. But almost every social media network was initially started to be a form of entertainment or a vehicle for socialization. And then somebody figured it out. The founders of Twitter never thought it could be used to raise money for a cause, or alert students that a gunman is on the loose on a college campus, or showcase a new medicine, or a new treatment modality.

So Chat Roulette...Just you wait.

Email ThisBlogThis!Share to TwitterShare to FacebookShare to Pinterest
Labels: chatroulette.com

A truism among social media marketing devotees is that above all, people trust endorsements from their "friends", making social media more effective than other traditional forms of advertising.

As an example, if you have a new product, you want to make sure that your Twitter followers rave about it, your Facebook friends become fans, and your Aunt Susie blogs about it.

So when Robert Berkman sent me a link to an Advertising Age article that said the exact opposite, I paid attention. (Probably because I had just read Bob's book "The Art of Strategic Listening - Finding Market Intelligence through Blogs and Other Social Media".)

The article, "In Age of Friending, Consumers Trust Their Friends Less" cites a recent study by Richard Edelman, his Trust Barometer, that found that the number of people who view their friends and peers as credible sources of information about a company dropped by almost half, from 45% to 25%, since 2008.

Edelman thinks it's a sign of the times and that consumers have to see and hear things in five different places before they believe it. He attributes this skepticism to the financial meltdown that has left us wary of big banks, the government, the Tooth Fairy and Father Christmas. (His sentiments, my words.)

the analysis... may be a little misleading. The headline... implies that people are trusting their friends less when making decisions. While that makes great copy, when you click on the chart what you really see is that trust in all forms of media... has dropped dramatically by approximately the same percentages. Trust in Friends/Peers hasn't dropped considerably more versus those other categories."

Singh also pointed out that, "the subject being discussed makes a big difference. For example, I'm not going to trust my friends very much when I'm deciding whether to get open heart surgery. However, if I'm buying running shoes ... advice from my friends will make all the difference.

Personally, I agree with Singh. I find it quite irritating when traditional media outlets use social media indiscriminately.

I live in the New York City area and experienced the over hyped "Blizzard of 2010". During the storm, I attempted to get reliable information on the magnitude of the expected snow fall by surfing TV news channels, only to find with distressing frequency interactions along the lines of, "Let's check out Joe Blow's webcam on Staten Island. Joe, what do you see when you look out your window?", or "Visit our Twitter feed for reports from our viewers around the area."

Are you kidding me? I don't give a $#%@! about Joe's yard! - I want a meteorologist with a state-of-the-art Doppler 7000 to give me an expert prediction about the storm.

What I think is happening is that people's sophistication about social media is on the rise. Users are beginning to figure out that:You get the point.