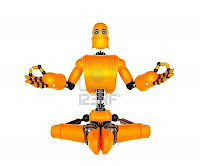 Raymond Kurzweil is a well known futurist who has been lauded for his uncanny ability to predict the future of artificial intelligence and the human race. In 1999, Ray published his second book of predictions, "The Age of Spiritual Machines."

Here are some of them:

In 1974, Arthur C. Clarke predicted the Internet and the personal computer.

Email ThisBlogThis!Share to TwitterShare to FacebookShare to Pinterest
Labels: The Age of Spiritual Machines