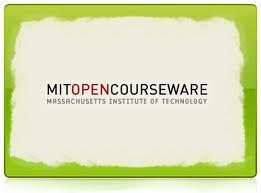 Don't know if you are aware, but almost every course given at MIT is available on line, for free.

You can learn Spanish, study "Godzilla and the Bullet Train: Technology and Culture in Modern Japan", or take "The Making of a Roman Emperor."

Of course there are endless courses on Mathematics, Computer Science, and Electrical Engineering. Along with offerings like "Einstein, Oppenheimer, Feynman: Physics in the 20th Century," "The Anthropology of Cybercultures", and even a graduate course entitled "Genetics, Neurobiology, and Pathophysiology of Psychiatric Disorders."

Did I say it was FREE?

I don't really understand why MIT is doing this. The explanation on their website is rather vague, "The idea is simple: to publish all of our course materials online and make them widely available to everyone.”

Before they change their minds, I am quietly going to take advantage of this.