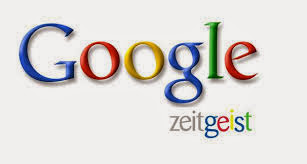 The end of the year is a time for reflection. Maybe even a time to consider its Zeitgeist - one of those German words, (coined in 1884,) that embodies an entire concept. It means the general intellectual, moral, and cultural climate of an era.

In 2001, Google realized that with, (at that time,) more than 150 million queries per day, they had a unique window into what was happening in the world on any given day, as well as a fascinating retrospective on the peaks and valleys of popular culture during the course of a year.

Pulling that data together, Google began to publish their version of the Year-End Zeitgeist and reveal the collective focus of the online mind, highlighting the main events that drew the attention of a global audience. The Year-End Google Zeitgeist provides a glimpse at what captivated the world over the past 12 months, based on the most popular search terms on the world's most popular search engine. All of this information is featured in an under 5 minute video, and also broken down into charts.

What is your guess about the soon to be revealed 2013 Zeitgeist?