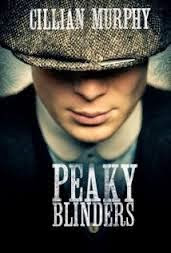 The other day I was at a dinner party.

I was seated at a round table (one of three) with 9 other guests. It was a cosmopolitan affair. The person to my left was a political activist from El Salvador. The person to my right was a twenty something artist form Berlin. There was a woman from Liechtenstein. An American specializing in the law pertaining to homeland security.

And what did this group talk about?

The TV shows they were streaming.

Most of them had or were in the process of streaming a Danish TV show called Borgen. Which has been described as the Danish "West Wing." Which I had never heard of.

A few days later, my 21 year old son told me he got a haircut. "It's a new style," he explained to me, "like the Peaky Blinders." Huh? I had him spell it for me. Turns out that the "Peaky Blinders," is a British historical crime drama television series about a gang operating in Birmingham, England, during the aftermath of World War I. I had never heard of it.

Of course with the Internet, I could quickly look up what I knew nothing about. Even though neither "Borgen" nor "Peaky Blinders" has every been broadcast on US TV, you can buy the DVD of "Borgen" on Amazon, and you can stream "Peaky Blinders" on Netflix.

My dinner guests and my son made me feel temporarily culturally illiterate.

In fairness to myself, achieving cultural literacy has become a highly complex affair.

When I was growing up, there was a finite number of TV shows, movies, books, music, and toys that you could access. And for the most part, you could only access your own country's cultural artifacts. In fact, if you lived abroad for two years - as I did between the ages of 10 and 12 - you came back with very little idea about what your friends were talking about. You had missed the TV shows, the movies, the jokes, the slang that had happened while you were out of the country.

Today, technology gives me access to more TV shows, movies, books and other knowledge than I can ever watch or learn in a lifetime. And should you wish to access the cultural heritage of another country, you can do so.

So what does it mean to be culturally literate in 2015?

Damned if I know.