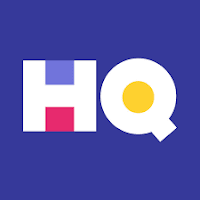 In the here and now, it's 2018 and the fad du jour is HQ, an app that can be downloaded and used for free.

At first glance, HQ sounds like something very enjoyable - at least to this trivia addict. Twice a day, at 3pm and 9pm EST you log into the app and are fed a series of 12 trivia questions, in ascending order of difficulty, in multiple choice format. To prevent cheating, you have 3 seconds to answer each question. Answer all the questions correctly and you get the pot - which ranges from $2,500 to $25,000. It's over in 15 minutes, (or less when you are eliminated for answering incorrectly and throw your iPhone against the nearest wall.)

Here is the reality:And yet I tune in - not every day but once or twice a week, because, what the heck, it's somewhat amusing and tolerable once I turn the sound off during Scott's ramblings.

Email ThisBlogThis!Share to TwitterShare to FacebookShare to Pinterest
Labels: HQ