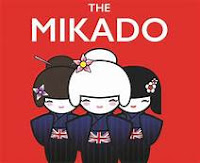 For two middle school years, I attended Maret, a K-12 private school in Washington DC. The music teacher there was a man named Dexter Davidson. He seemed to be quite elderly to me at the time, but in retrospect was probably in his late 50s.

Each year, all the music classes learned the score for an ambitious musical offering in which everyone participated in some measure.

As an example, when I was in 9th grade, the plan was to put on the Mikado, a satiric 19th century operetta composed by Gilbert and Sullivan. For those of you who don't know their many compositions, treat yourself by watching them on YouTube. Here for example, is an Australian company's version of "I've got a little list." By tradition, the words to the song are updated to reflect contemporary aggravations:


Music classes were spent sitting at a desk with the score, singing the songs together. All the songs. The solos, the duets, the trios, the chorus numbers and the finale - we learned every note. Since Gilbert and Sullivan works have catchy melodies and hilarious lyrics, we loved every minute of it. Towards the end of the school year, everyone had memorized the entire Mikado.

Then came the time to put on a show. The principal roles were cast by audition and usually featured high schoolers - but anyone who wanted to, regardless of musical aptitude, was on stage. Mr. Davidson believed everyone, regardless of age or talent, could learn the choreography of each number.

At the time, it was all so much fun. But today, I realize how progressive and brave he was. Being allowed to play the opposite sex, being included in any show in which you wanted to perform, being able to learn an ambitious musical work regardless of age. He brought the entire school together, making everyone feel appreciated and included. Making us think that we could tackle any project, regardless of who we were.

Mr. Davidson, you were an exceptional teacher. Because I was taught by you, my entire life is better.

Email ThisBlogThis!Share to TwitterShare to FacebookShare to Pinterest
Labels: teacher