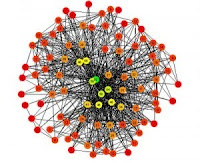 In all of my presentations about social media, I emphasize that the quality of one's friends, followers, readers, etc. is far more important than the number.

Well there is some hard core science behind my recommendation.

In 1992, long before the advent of social media, British anthropologist Robin Dunbar hypothesized that there is a cognitive limit to the number of people with whom one can maintain stable social relationships. By stable, he meant relationships in which an individual knows who each person is, and how each person relates to every other person. Though Dunbar did not assign a precise value to the number, (it lies between 100 and 230), the commonly used value is 150. So 150 is referred to as Dunbar's Number.

Well, the 1990s came and went and nobody, except social scientists, were paying much attention to Dunbar's work, until....the social media explosion of the 21st century.

I have around 1k+ linkedin connections, 1k facebook friends, and over 4,300 twitter followers. A very tiny portion of these people are strong ties. What social networks have allowed us to do is to build massive networks of weak ties. I use these weak ties all the time to reach out to folks for guest articles, business requests, speaking engagements, or ideas and advice...

We shouldn't be trying to figure out how we can maximize the number of strong relationships we can build or how we can beat Dunbar's number... Build weak ties where you can because they are extremely valuable, more so than strong ties.

Well, I am not sure I entirely agree with Mr. Morgan. People are constantly asking me questions about social media. Should they have a Facebook? Be on LinkedIn? Do both? To these and other similar queries, I always answer with a question. "What are you going to use it for?" Once you can answer that question, making a useful recommendation is easy.

Say you want to use Twitter to be elected to public office, it would make sense to work very hard to get a million weak tie followers.

But for most professionals, Dunbar's 150 strong ties will do just fine.

A handful of key colleagues are usually more instrumental in getting referrals, speaking gigs, or even a new job, than hundreds of random "friends."