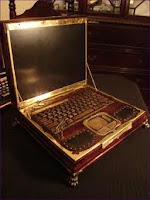 When you were a child, did you think that once you became a 21st century adult, everything would be high tech and futuristic?

Were you pretty sure that by then, everyone would be flying around in spaceships, using the latest electronic gadget, while giving commands to a personal robot?

That isn’t the way it turned out though, is it?

Co-existing with smart phones, iPads and other technological marvels, there is a world of people living in the past and the future, all at the same time. And I am not just talking about remote tribes in the Amazon.

We all know someone who still lives like it’s 1999 - or even earlier. One of my friends doesn’t have a cell phone. He still uses a hardwired phone built into his car. It will soon be unsupported by Verizon, completely obsolete and unusable.

That’s why I love Steampunk.

It’s a literary, artistic, and philosophical movement that depicts a world that never existed. Steampunk objects are powered by steam and springs instead of electricity and fossil fuels. When you see a Steampunk object, you wonder “Is it from the past or is it from the future?”

It's a way for people to master technology, instead of letting the rapidly changing world sweep them away.

Email ThisBlogThis!Share to TwitterShare to FacebookShare to Pinterest
Labels: Steampunk