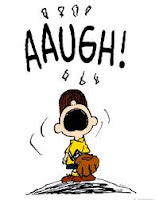 I think you will all agree that this blog has featured a minimal amount of whining. That is about to change.

Several months ago, when I signed into Blogger to create a new blog post, I noticed the words that strike fear into my heart: "Blogger is getting a new look!"

I have also received the following announcements, (forgive me for paraphrasing): Usually, you receive this horrible news a number of months before the change takes place and can ignore it. But sooner or later, like death and taxes, they will force the new look/system/user interface on you.

This will be announced thusly: "Blogger has a new look! Introducing the completely new, streamlined blogging experience that makes it easier for you to find what you need and focus on writing great blog posts."

Take my word for this, 99.99% of the time, this "upgrade" does not make anything easier. Au contraire, it means that what you used to accomplish without any difficulty whatsoever, is now gone forever, and you are going to have to take hours of your time to learn the "new and improved" version of, in this case, Blogger.

The other day, I heard that one of the marked characteristics of the successful 21st century employee, will be his/her ability to constantly learn new stuff, in contrast with earlier centuries, when you learned stuff in school or an apprenticeship, and once you entered the workforce, you applied what you learned for the rest of your life.

So we are not so lucky. But wait, there's more.

This is not an across the board problem.

Take cars for example. If I don't want a car that works like a computer - a 2013 model with Bluetooth, a slot for your iPhone, GPS, a warning that sounds if you change lanes without signaling, etc., etc. - I can buy an older version of that car.

You can hang on to that retro feeling 2005 Dell Inspiron laptop.

Not so with social media tools, or computer software. Were you in love with Windows XP? Sorry Charlie, Microsoft has announced it will no longer support it.

Am I concerned that the pace of change is accelerating with every passing month, to the point where I am spending increasing amounts of time learning the "new look" of an increasing number of "streamlined" systems? And it's not just new versions of known systems. How about the fact that there are new social media channels and technologies being introduced all the time? (And remember, I love technology...)

There is a silver lining in this cloud of change. If you didn't jump on the social media bandwagon in 2008, you can just pick up whatever is going on right now.