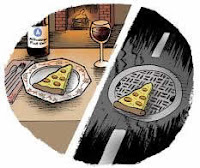 As I write this post, New York City pauses to observe a moment of silence in remembrance of 9/11.

I struggle to remember what the world was like in 2001.

I come across a fascinating article "What Online Internet Websites Looked Like in 2001" which helps me remember that:

In 2001, the majority of Americans didn't have the Internet.

Most people got online using dial up connections.

Only 7% of Internet users worldwide had broadband.

Most things purchased online were paid for by money order...

If you got any news on the phone, it was probably because you were using it to talk to someone. Assuming you had a cell phone - only 45% of Americans had one.

No social media. No instant, updated every second, news.

Context: the circumstances that form the setting for an event, statement, or idea, and in terms of which it can be fully understood and assessed.

Easier, because you were only aware of what was right in front of you.

I telecommute - made possible by a laptop and high speed connectivity.

I shop online - rarely in a store.

I read books on my iPad.

I almost never use snail mail.

And unless I turn off every device I own - a rare event during my waking hours - it feels like I am connected to the world.

So while I listen to the 9/11 ceremony on my TV, videos of hurricane Irma stream across my screen.

News from Europe is texted to me by a friend in Switzerland.

Somewhere there are disasters, destruction and death on a large scale.

Here the sun is shining and it's New York Fashion Week. I can stream it if I want.

I wonder how it is possible to live a moral life in 2017.

If I know everything...

...Shouldn't I be on the barricades somewhere, saving someone?

Email ThisBlogThis!Share to TwitterShare to FacebookShare to Pinterest
Labels: context