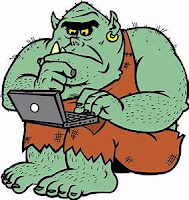 Internet trolls are the hotile and sometimes dangerous people who post nasty comments and disinformation on the Internet - usually to create trouble of one kind or another.

Last month, The New York Times published an article "The Internet Trolls Have Won. Sorry, There’s Not Much You Can Do." by Brian X. Chen.

Unfortunately, understanding trolls and trolling is essential in the 21st century, so here is my summary of the most important information culled from this important article:

Most experts agree agree that trolling has no easy fix.

Chen notes: "Over the last decade, commenting has expanded beyond a box under web articles and videos and into social networking sites like Facebook and Twitter. That has opened the door to more aggressive bullying, harassment and the ability to spread misinformation...

Case in point: the right-wing conspiracy site Infowars. For years, the site distributed false information that inspired internet trolls to harass people who were close to victims of the Sandy Hook school shooting. This week, after much hemming and hawing about whether to get involved, some giant tech firms banned content from Infowars.

What does that show us? That you as an internet user have little power over content you find offensive or harmful online. It’s the tech companies that hold the cards."

There are many theories about why the internet seems to bring out the worst in people... people use the internet to get more of what they do not get enough of in everyday life. So while people have been socialized to resist being impulsive in the real world, on the internet they cave to their temptations to lash out.

...the quality of comments vary widely depending on the pieces of content being discussed and the audiences they attract. For example, there are videos about niche topics, like home improvement, that invite constructive commentary from enthusiasts. But there are others, such as a music video from a popular artist or a general news article, which ask people from all around the world to comment. That’s when things can get especially unruly.

It’s up to the content providers and tech platforms to vet their communities and set rules and standards for civilized discussion.

Many resource-strained news publications fall short: They often leave their comments sections unmoderated, so they become cesspools of toxic behavior. It is also an area where tech companies like Facebook and Twitter struggle, because they have long portrayed themselves as neutral platforms that do not that do not wish to take on the editorial roles of traditional publishers.

What about fake comments?

Unfortunately, security researchers have shown there are workarounds to all these methods.

When the Federal Communications Commission was preparing to repeal net neutrality last year, there were 22 million comments posted on its site, many of which expressed support for the move.

One expert used a machine-learning algorithm to discover that 1.3 million comments were likely fakes posted by bots.

What can you do?

For the issue of spoofed comments, there is a fairly simple solution: You can report them to the site’s owner, which will likely analyze and remove the fakes.

But for truly offensive comments, the reality is that consumers have very little power to fight them. Tech companies like YouTube, Facebook and Twitter have published guidelines for what types of comments and material are allowed on their sites, and they provide tools for people to flag and report inappropriate content.

Yet once you report an offensive comment, it is typically up to tech companies to decide whether it threatens your safety or violates a law — and often harassers know exactly how offensive they can be without clearly breaking rules.

Beyond reporting comments individually, you could also use an online petition tool like Change.org to demand that tech companies remove offensive content.

The article closes with this advice:

“Think before you read... Think before you speak. And you don’t always have to respond. A lot of things do not deserve a response. Sometimes not responding is more effective than lashing out.”

Email ThisBlogThis!Share to TwitterShare to FacebookShare to Pinterest
Labels: Trolls