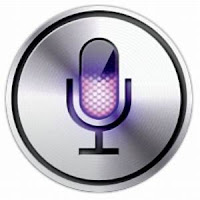 Sooner or later I know that I will have to use voice commands, I've just been procrastinating as long s possible

But this article "How to Tap Less on your Phone" made me think that now is the time for you and I to learn how to use Siri.

Here are some key tips from the article:

1. You can ask Siri to “Turn on the flashlight.” Well that's super useful!

2. You can say, “Do not disturb” as you enter a movie theater, a meeting or your bed.

3. Squeeze for silence. When your phone rings at a bad moment — at a movie, for example — don’t pull it out and fumble for the Ignore button. Instead, just reach into your pocket or purse and squeeze the phone. Pressing any button on the edge of the phone means “Silence the ringing,” — and when you grasp the phone this way, you’ll hit one of those buttons in a hurry.

Email ThisBlogThis!Share to TwitterShare to FacebookShare to Pinterest
Labels: iphone