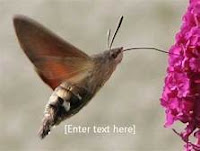 Recently, I was on a hike in Santa Fe, NM with one of my Millenial children, enjoying the clean air and admiring the various exotic plants and animals native to that area.

Suddenly I exclaimed, "Wow, look at that hummingbird!" noticing a creature batting its wings so rapidly that its movements were a blur. My son answered "I don't think that's a bird..."

And then he did something I had only previously seen in "Star Trek" episodes - he whipped out his tricorder, er, I mean iPhone, waved it in front of the animal for a few seconds, and then announced "This is a Hyles lineata, also known as the hummingbird moth, because of their bird-like size (2-3 inch wingspan) and flight patterns."

My son explained, "It's an app called Seek."

Seek was developed by the California Academy of Sciences and the National Geographic Society. It uses the power of image recognition technology to identify plants and animals around the world.

Who knew we had such mind blowing scientific capabilities!

I immediately downloaded the, (by the way FREE,) app and started roaming around scanning and identifying everything in sight.

Interested in having your children use their smartphones for something positive and educational? This one's for you.

This one's for everyone.

Email ThisBlogThis!Share to TwitterShare to FacebookShare to Pinterest
Labels: Seek