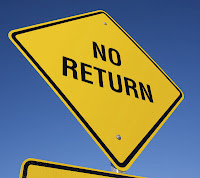 There is a point in time, when new technology moves from being used by a small number of early adopters to being widespread.

It is fair to say that in the 21st century, the time span that separates a new technology from universal acceptance is becoming much shorter.

However, everyone has a personal point of no return.
In most cases, I have to be convinced that a technology is absolutely essential before I jump on that band wagon.

Sometimes, however, my conversion is immediate.
Other gear, I had to ponder for a while.
Some tech and social media innovations - I still don't own or use.
Sometimes, I resist the latest version of something that didn't need improvement (in my opinion.)
What is your point of no return?
Posted by iWebU at 8:30 AM

Email ThisBlogThis!Share to TwitterShare to FacebookShare to Pinterest
Labels: Point of No Return